Pep Guardiola delighted to have Vincent Kompany back 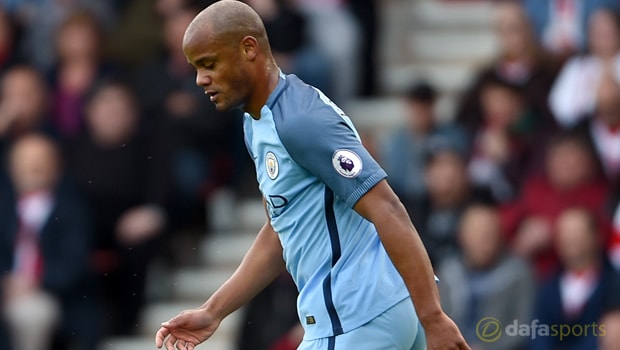 Pep Guardiola was delighted with the performance of Vincent Kompany in Manchester City’s comfortable 3-0 success at Southampton.

City’s talismanic captain has made just eight appearances in another campaign limited by niggling injuries, but returned at St Mary’s with a rock-solid display and he even managed to pop up with the opening goal on 55 minutes.

Kompany’s leadership was evident throughout and, in truth, Saints rarely threatened.

It was a stark contrast to some of City’s defensive displays this season and Guardiola hailed the Belgian afterwards and he hinted that without injuries, his side would be closer to league leaders Chelsea.

“I missed Vincent Kompany a lot. He wins duels, he can find passes to help us, so hopefully he can be fit until the end of the season because he’s important for us,” said the Spaniard.

“With all the injured players, Gabriel Jesus, Ilkay Gundogan, we would have been stronger.”

City are seven points behind second-placed Tottenham after their respective wins this weekend and Guardiola feels catching the White Hart Lane side is a lot to ask.

In fact, he anticipates fighting for a top-four finish right until the final day of the season.

“This result is so important for our qualification for the Champions League,” said Guardiola, whose side host neighbours United in their next league game.

“It will go to the last game for the Champions League. It will be so tough.

“Tottenham are so strong. We saw again today that they are not going to drop points.

“Our performance away in that league was amazing this season. We dropped too many points at home.”

City now prepare to face Arsenal in the FA Cup semi-finals at Wembley next week.

They are 2.00 to win that game and 3.25 to hand Guardiola his first piece of silverware in English football by winning the FA Cup.