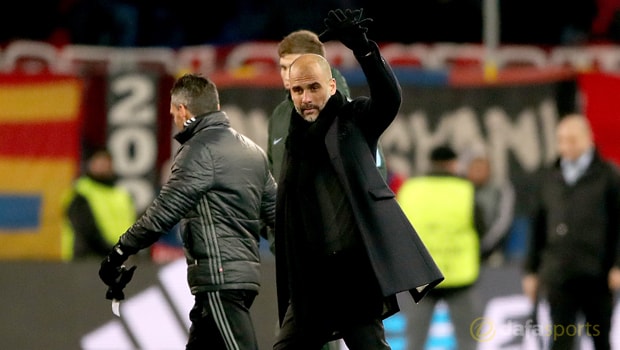 Pep Guardiola believes Manchester City’s 4-0 victory over Basel in the first leg of their Champions League last-16 tie can benefit the Citizens in other competitions.

City were at their ruthless best during Tuesday night’s contest at St. Jakob-Park, as a brace from Ilkay Gundogan and further goals from Bernardo Silva and Sergio Aguero helped them secure a comfortable victory.

The Citizens are now all-but certain to reach the quarter-finals of Europe’s premier club competition, with the return leg against Basel on March 7 now seemingly being little more than a formality.

Guardiola was certainly pleased to see his side build a healthy lead during the first leg, as it means City can now focus their attention on the other three competitions they are still challenging for glory in.

Before they face Basel again, City will take on Wigan in the FA Cup on Monday, Arsenal in the Carabao Cup Final the following week, as well as Premier League clashes with the Gunners and Chelsea.

The next few weeks certainly represents a crucial stage of City’s season, as Guardiola tries to ultimately steer his side to an unprecedented quadruple come the end of the campaign.

Assessing City’s varied schedule, Guardiola told reporters: “It’s so important. Of course we will be focused against Basel but with the result.

“Arsenal and Chelsea, it will be so important to be focused there and make another step to try to be close to the Premier League.”

Next up for City is the FA Cup last-16 clash with League One outfit Wigan at the DW Stadium on Monday in what will be a repeat of the 2013 final, a match the Citizens ultimately lost.

Guardiola’s side are priced at 1.17 to secure a victory this time around, while Wigan are available at 15.00 and the draw is on offer at 7.50.