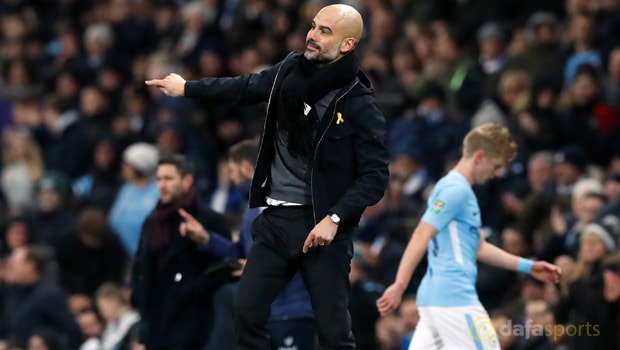 Pep Guardiola said he was proud of the professional performance his Manchester City side delivered in coming from behind to defeat Bristol City 2-1 in their Carabao Cup semi-final first leg.

City were heavy favourites to win the Etihad Stadium tussle although Bobby Reid fired the Championship outfit in front from the penalty spot late in the first half.

Guardiola fielded a strong line-up for the game and they were level on 55 minutes via Kevin De Bruyne.

But it took until injury time before sub Sergio Aguero nodded the goal that gives Man City a lead to take to Ashton Gate for the second leg next week.

It may have been more of a struggle than many predicted, but Guardiola was extremely satisfied with how his players went about their business, particularly having fallen behind.

“My players are fantastic,” Guardiola said.

“In football you can win or lose, but we tried and tried until the end, and that’s why [we scored the winner] because we didn’t give up.

“We know exactly what this competition is with a lot of games, and semi-finals are always complicated. That’s why I’m so satisfied.”

The Spaniard heaped praise on Bristol City for their attitude and how they attempted to play football in the right way.

He also had a quick rebuke for anyone that suggested his team were fortunate to be facing a lower-league team in the last four, with a quip that is sure to hurt neighbours Manchester United after they were stunned by Lee Johnson’s side in the previous round.

“People will say we’re playing Championship teams, but a lot of Premier League teams are out because teams from the second division [beat them].

The important thing is our spirit and to see what we do in the good and bad moments,” he added.

Manchester City are 1.44 to win the Carabao Cup this season.