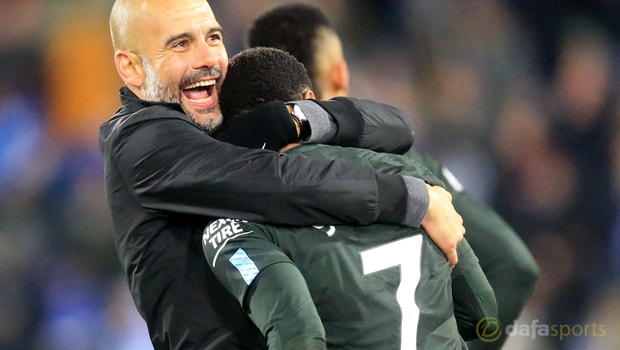 After a gritty opening 45 minutes, Kevin De Bruyne broke the deadlock shortly after the break, only for Oriol Romeu to equalise for the visitors. The Etihad became increasingly nervous as the moments ticked by and all looked lost until Sterling fired in the decisive goal six minutes into stoppage time.

It was the third time in as many games that the England star has netted the winner, having also made the difference in the wins over Feyenoord and Huddersfield.

The 22-year-old’s strike was his 13th of the season and gave Guardiola’s men a club record 12th straight Premier League victory.

Sunday sees the Citizens welcome struggling West Ham to the Etihad for a game they are 1.10 to win, with the draw 10.00 and the Hammers 26.00.

Sterling is again likely to feature and there is no doubt he has grown as a player under his boss’ tutelage and appears to have gained the confidence he was previously lacking.

The Spaniard admits the playmaker has improved dramatically this season, crediting his newfound belief for his recent transformation.

“Raheem is a match-winner, it was a fantastic goal, I am so happy for him,” Guardiola said.

“As I have said many times, he is making steps. Before he was a little bit more shy and he did not believe, but now he can do that.

“I think his team-mates give him the confidence and say ‘we trust in you’ but then you have to have the personality to do what he did in the last minute.”