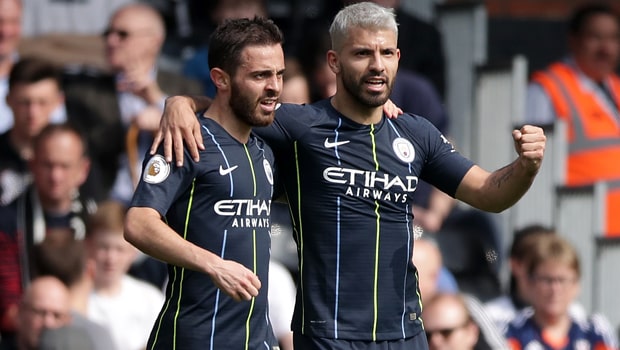 Manchester City manager Pep Guardiola is hoping Sergio Aguero isn’t seriously injured after he had to be withdrawn early in Saturday’s win over Fulham.

The Argentinean played a key role in helping City, who are priced at 1.33 to win the Premier League, to return to the top of the standings following a 2-0 victory over a hapless Fulham.

Aguero teed up Bernardo Silva for the opener just five minutes in before cutely clipping beyond Sergio Rico to notch City’s second midway through the first half.

It was his 19th Premier League strike of the campaign, although just his fourth on the road, but the afternoon ended frustratingly for the ex-Atletico Madrid striker.

City are in action again on Wednesday when they host relegation-threatened Cardiff at the Etihad Stadium. Guardiola is unsure if Aguero will be available for that clash at the Etihad and admits they will need to monitor him over the next few days.

“He says he felt something, but hopefully he’s not injured,” said Guardiola.

“He decided on not continuing. Hopefully it will not be a big issue. We will see tomorrow, maybe the day after tomorrow.”

Saturday’s win still keeps City on track for an unprecedented quadruple and Guardiola has called on his men to keep their focus with seven games left to play in the league.

He added: “Seven games left for the Premier League, and it’s easy: we have to win every game to be champions.

“We have a tough, tough opponent – but that’s the challenge. “It was a tricky game for us after the international break, but the way we started was amazing. The players surprised me again. “We showed how focused we are to try to do our best.”