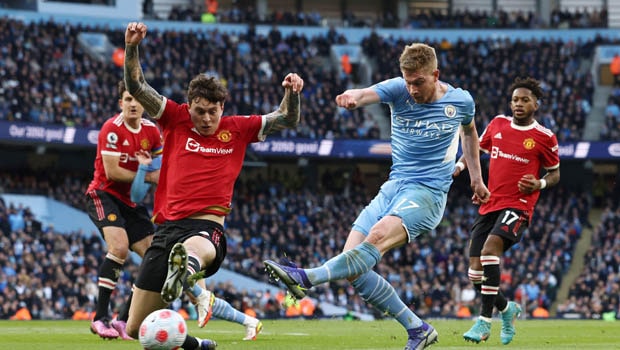 Manchester City strengthened their lead on the Premier League table on Sunday evening when they defeated lacklustre Manchester United 4-1 at the Etihad Stadium.

Pep Guardiola’s side needed to win to extend their points gap between themselves and Liverpool, but they had to do it against Manchester United, who was without Cristiano Ronaldo, as he was ruled out due to injury.

Thereon, it was all Manchester City as Mahrez made it 4-1 with a brace of his own in the second half. With the win, City now stands top of the table with six points ahead of the second based Liverpool, who has played a game less.

Meanwhile, Pep Guardiola believes that the Reds are the toughest opponents he has faced despite winning three out of the last four Premier League titles.

“I said many times the biggest form of success for a manager is that after winning three Premier Leagues in the last four years, we still run like we run, and we are still there to win again. We have the toughest opponent I have ever faced in my career as a manager. Fighting with them [Liverpool] and being with them for trophies and titles is the biggest achievement I have done in my career.” Guardiola said.

Meanwhile, in the other game on Sunday, Arsenal defeated stubborn Watford 3-2 to move into the UEFA Champions League places.

The gunners have 48 points from 25 matches played, although they still have 3 matches in hand and are already a point ahead of Manchester United.

Martin Odegard opened the scoring in the fifth minute before Cucho Hernandez’s acrobatic leveled the score on the tenth minute.