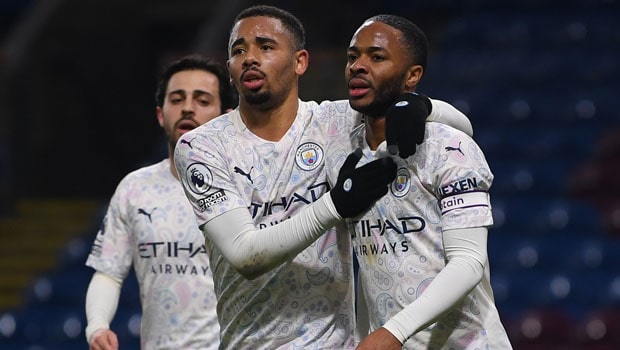 Two first-half goals from Gabriel Jesus and Raheem Sterling saw Manchester City to their 13th straight victory in all competitions with a 2-0 win over Burnley on Tuesday at the Turf Moor.

Pep Guardiola’s side is unbeaten in 20 matches in all competitions, and the Citizens haven’t lost since the 2-0 loss to Tottenham in the Premier League in November.

However, Guardiola admitted that his team struggled for some parts of the game, and he also complained about his team’s inability to score more than the two goals in the match.

“The first 15 minutes of the second half was our best football. Unfortunately, we could not score a third or fourth goal. In the last 15 minutes, we passed the ball without the intent to attack, just to control. Strikers need goals for their confidence. Gabriel Jesus played good.” Guardiola said after the match.

It’s a second loss for Sean Dyche’s side after the weekend’s 2-0 loss at Stamford Bridge. They now have three wins and two defeats in their last five matches in all competitions.

The win restores City’s three-point advantage at the top of the table after Manchester United walloped Southampton 9-0 on Tuesday.

Manchester City will face Liverpool in their next Premier League match. Brighton will be the guests of Burnley at the Turf Moor.

Coincidentally, Brighton defeated Liverpool at Anfield on Wednesday by a lone goal. Jurgen Klopp’s side is now seven points away from the top of the table.

On Thursday, Tottenham will welcome Chelsea to the White Hart Lane Stadium as Thomas Tuchel continues his Chelsea journey.