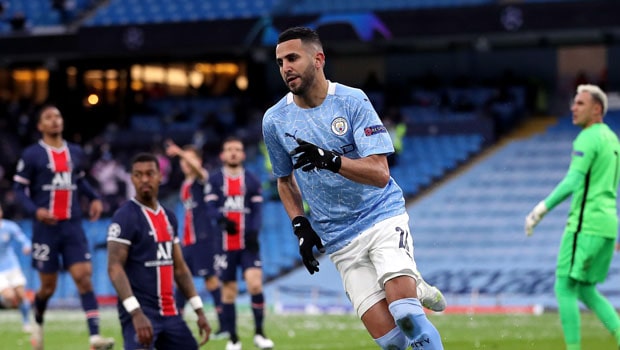 Manchester City was in dominant form again on Tuesday evening as they defeated Paris St Germain in the second leg of their UEFA Champions League semi-final.

The Citizens made their first-ever European final after replicating a similar result to their first-leg come-back victory last Tuesday.

The former Leicester City forward had scored the winner in the first leg last week.

Meanwhile, PSG was without French forward Kylian Mbappe who was sidelined before kick-off due to injury problems he sustained against RC Lens in the French Ligue 1.

Nevertheless, they had Neymar in the line-up but Pep Guardiola’s were compact to keep a clean sheet.

Mahrez extended City’s aggregate lead just 11 minutes into the game to make it 3-1 in the tie. He made it 2-0 on the night just three minutes after the hour mark.

However, PSG was reduced to ten men for the second consecutive Champions League game after former Manchester United midfielder Angel Di Maria was red-carded in the 69th minute for a stamp on Fernandinho.

Meanwhile, Guardiola’s side will now face either the Spanish side Real Madrid or fellow Premier League team, Chelsea, in the final on the 29th of May in Istanbul, Turkey.

Pep believes the result and the final qualification justifies the labor of the last five years at the Etihad stadium.

“People believe it’s easy to arrive in the final of the Champions League. Getting to the final now makes sense of what we have done in the past four or five years.” Guardiola said.

Meanwhile, Real Madrid will be in London at Stamford Bridge on Wednesday to face Chelsea in the second leg of the second semifinal. The first leg ended 1-1.