Posted by Vincent Henderson on September 23, 2018 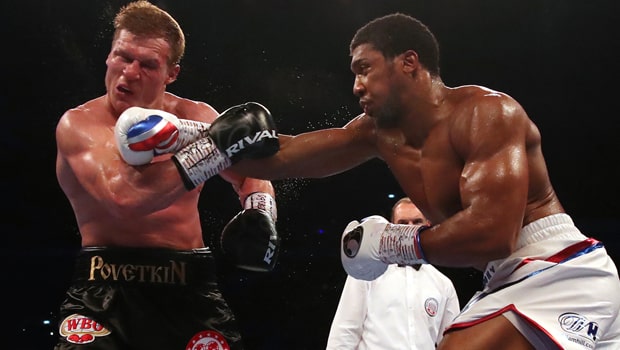 Anthony Joshua recovered from a challenging start to deliver a stunning seventh-round finish and stop a game Alexander Povetkin at Wembley.

The underdog started in promising style and was matching Joshua, delivering a bloodied nose to the 2012 Olympic champion.

Joshua however responded in kind to the challenge, unleashing a savage right hand followed by a left hook that began an onslaught which would prove telling in round seven.

Another quick-fire right-left combination left Povetkin on the floor and, while he survived the count, he only managed to stagger back into a ferocious left hook that left him slumped into the ropes, with referee Steve Gray with no option but to stop the bout.

Having been taken to 12 rounds for the first time in his previous fight against New Zealand’s Joseph Parker in Cardiff in April, Joshua was delighted with his latest stoppage.

“Povetkin is a very tough challenger, he proved that with good left hooks and counter punches,” he said.

“I came in here to have fun, and give it my best. I knew he was strong to the head but weak to the body. I was just mixing it up.

“It could have been seven, maybe nine, maybe 12 rounds to get him out of there, but the ultimate aim was to be victorious.

“And I got my knockout streak back.” WBC champion Deontay Wilder is likely to come into sharp focus for the Joshua camp following his latest impressive success.

The American is down to face Tyson Fury in December and could be Joshua’s next opponent when he makes his scheduled return to Wembley in April.