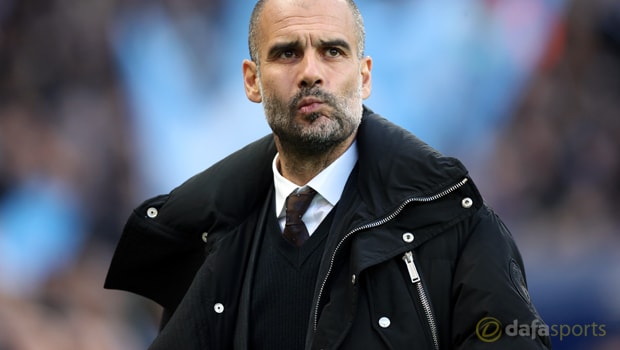 Pep Guardiola expressed his delight having watched Manchester City record their biggest win of the season with a 5-0 triumph over Crystal Palace at the Etihad Stadium.

The City boss felt the goal-rush allowed everyone to enjoy the closing stages of a game without pressure for a change, while he acknowledged that the boost to their goal difference could prove crucial in the race for Champions League qualification.

The victory over Palace lifted Man City above Liverpool into third place on goal difference, the teams now both having three games each left to play.

City, crucially, have a four-goal cushion on the Reds and if they can continue to be ruthless in front of goal, that could prove as good as a point come the season’s end.

“I’m pleased because finally the staff and players can enjoy the last 30-35 minutes without the pressure for the result and with that we can play a little bit better.

The goal difference is so important,” Guardiola told a news conference. David Silva scored early on in his return to action, while Vincent Kompany doubled the lead shortly after half-time.

Kevin De Bruyne made sure before the hour before Raheem Sterling and Nicolas Otamendi put the gloss on late in the game.

Guardiola talked up the performance, recalling the excellent recent results achieved by Palace and he hopes it can prove
a catalyst for his side in the final push to secure a top-four finish.

“You cannot forget that weeks ago Crystal Palace were able to win at Stamford Bridge and Anfield and they destroy Arsenal,” Guardiola said.

“I know the quality of their players and Sam Allardyce, which is why scoring five goals against that team gives us a lot of credit.

“It makes a difference because we have three games in a mini-competition to see if we are going to play in the Champions League next season so it’s a good start.”

Manchester City are 1.05 for a top-four finish after the rampant win against Crystal Palace.