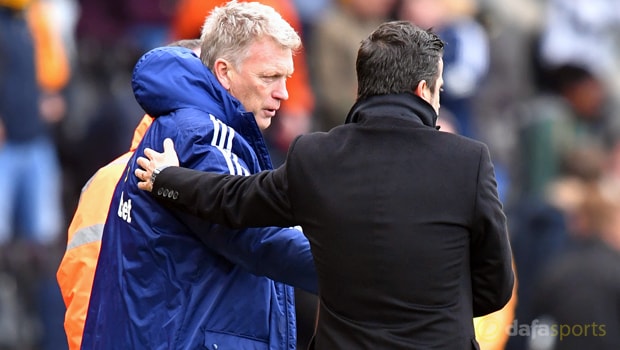 David Moyes admitted he couldn’t take a lot of pleasure from Sunderland’s 2-0 win over Hull City at the KCOM Stadium.

The Black Cats were relegated to the Championship a week ago but goals from Billy Jones and Jermain Defoe on Humberside gave them a rare away win and dealt Hull’s survival hopes a significant blow.

It was just Sunderland’s sixth win of the season, while Hull dropped into the relegation zone after Swansea beat Everton at the Liberty Stadium later on Saturday.

For Moyes, it was pleasing to see his team win but he says nobody at the club can take any great joy from it.

“We’re really disappointed, we can’t be smiling,” he said.

“We’re pleased we’ve won today but obviously we can’t be smiling about the bigger picture. But it’s gone now, we can only try to improve and show what we can do.

“I thought the players showed exactly what they’re capable of. I thought they worked hard, played well, defended well. We wanted it sooner, but at least we’ve played a bit better.”

Sunderland had failed to win in ten games prior to beating Hull, stretching all the way back to their 4-0 win over Crystal Palace at Selhurst Park in early February. According to Moyes, they have deserved more.

“If you’d seen our performances against West Ham, Bournemouth, even at Middlesbrough, I don’t think any of the games we deserved to lose. Today we got the goals, maybe kept them out at crucial moments as well.”

Hull are now 1.22 to be relegated, while Swansea are 4.33 for the drop after their victory over Everton.