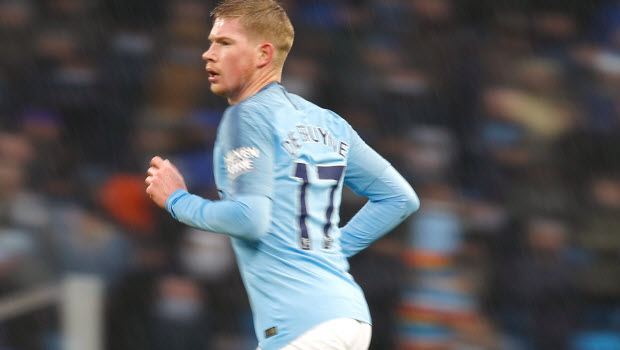 Manchester City midfielder Kevin De Bruyne has played down Pep Guardiola’s suggestion he was ‘exhausted’ after last season and ‘too tired’ starting this one.

De Bruyne made 52 appearances in 12 months in all competitions for City before starring for Belgium as they finished third at the World Cup in Russia last summer.

“It was so tough for him and when he came back I had the feeling he was a little bit tired.” De Bruyne is in the squad for City’s Carabao Cup quarter-final against Leicester on Tuesday and he says he felt fine starting the season and was unfortunate to twice suffer setbacks.

“I wasn’t exhausted,” he said. “I had a rest of about three weeks after 12 months of playing.

Is that short? Probably, yes, but I felt OK to come back. “I played the most of anyone last year – in the whole world – and I played the World Cup without a problem. I think the most important thing is having a summer break, if you have that you can feel OK.”

De Bruyne’s second knee injury occurred during the League Cup tie against Fulham on November 1, as he was stepping up his return from a previous setback. He doesn’t believe there was a link between the injuries and his overall state of physical well-being.

“There is always a time in someone’s career where you feel a bit less but I felt all right. It was just a shame that when I came back after one week I was then out for two and a half months,” he said.

“I was happy to come back and worked really hard but after three games it happened again,” he added.