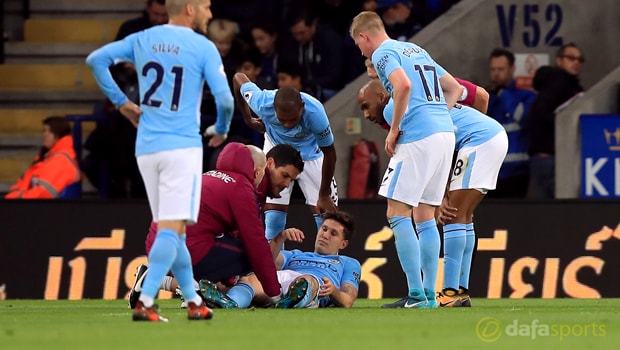 Manchester City manager Pep Guardiola says that defender John Stones could miss up to six weeks of action after sustaining a hamstring injury in Saturday’s win at Leicester.

City’s attacking options of Sergio Aguero, Gabriel Jesus, Leroy Sane, Raheem Sterling and Kevin De Bruyne have all received plenty of praise, but their defensive performances have been just as impressive.

The league leaders boast the second best defensive record, conceding just seven times, and Stones has played a big part in keeping things tight at the back in the absence of captain Vincent Kompany, who made his return from injury at the King Power Stadium.

However, City look like they will need to do without Stones for around six weeks after he pulled up with a hamstring injury early in the 2-0 victory at Leicester.

The former Barnsley man will need to be assessed early next week but Guardiola fears the worst as their schedule grows busier in the build up to the Christmas period.

Guardiola said: “It is unfortunate for us and for John and I think he might be out for six weeks with that type of injury. “It is tough because the calendar is so demanding.

“We don’t have a lot of central defenders, but the spirit in the team – and with all the players – is good so we are going to find a solution.”