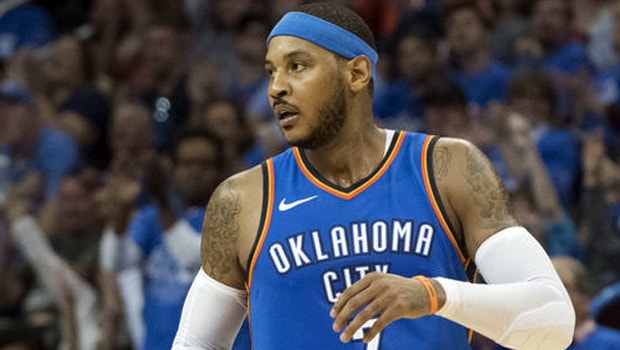 Carmelo Anthony knows Oklahoma City Thunder must become more ‘selfish’ in attack if they are to get their season back on track.

Oklahoma reached the playoffs last season before losing to the Houston Rockets in the first round, but optimism was high of an improved performance this term.

However, the Thunder have struggled for consistency at the start of the current campaign, with Friday’s defeat to the San Antonio Spurs leaving them outside the playoff positions in the Western Conference Standings.

Anthony, George and Westbrook are unsurprisingly leading the scoring statistics for the Thunder, but they are struggling for shooting efficiency and Anthony believes the only way they can improve that record is by becoming more selfish in offensive areas.

“Now we’re just playing too unselfish, too timid, we’re thinking too much.

Russ, PG, myself, we have to do a better job of being selfish in a way of playing our game and being aggressive on the basketball court,” Anthony said, per Fred Katz of the Norman Transcript.

“We play off of instincts. We’re very instinctive players. Now we’re not playing like that.”

Oklahoma still have plenty of time to turn their season around and they did show signs of improvement prior to their defeat to the Spurs, as they had won three games in a row going into that contest.

Billy Donovan’s side have not claimed the Western Conference title since 2012, but they are priced at 13.00 to achieve that feat this term, while they are available at 19.00 to secure overall NBA Championship glory come the end of the campaign.