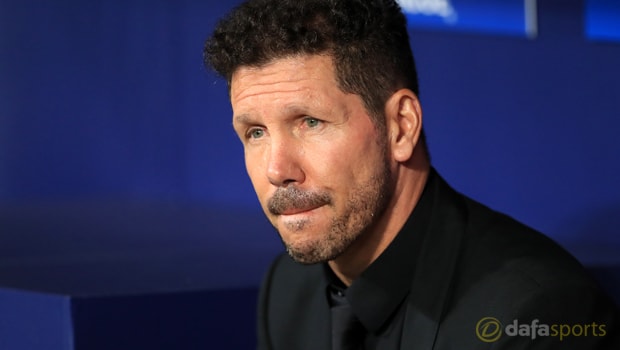 Diego Simeone has played down concerns over Atletico Madrid’s start to the 2017-18 campaign and insists they still remain competitive in the Copa del Rey and La Liga.

Atleti were held to a goalless draw at home to rivals Real Madrid on Saturday evening and both clubs currently sit 10 points adrift of league leaders Barcelona, who are priced at 7.50 to win the Champions League.

Simeone insists he was happy with the overall performance, which saw the Madrid neighbours meet at the Wanda Metropolitano Stadium for the first time, and feels they could have come away with all three points.

However, Angel Correa and Kevin Gameiro failed to convert Atletico’s best chances and Barcelona emerged as the real winners from the Madrid derby.

Los Colchoneros have also struggled in the Champions League this season and find themselves on the brink of elimination after failing to win any of their opening four matches.

The Copa del Rey still remains a realistic target following a 1-1 draw against Elche in the first leg of their round-of-32 clash and Simeone has played down fears that their season could already be over.

“We saw the team that we are in the opening 25-30 minutes. We were very needy after Barca won.

“[Madrid] also did very well and pushed up well on the left. The second half was a classic Derbi, in which either side could’ve won.

“Still, the clearest chances fell to Correa and Gameiro.

[Madrid] then showed their football all over the pitch, but we worked very well collectively. We only lacked clarity in our transitional play.”