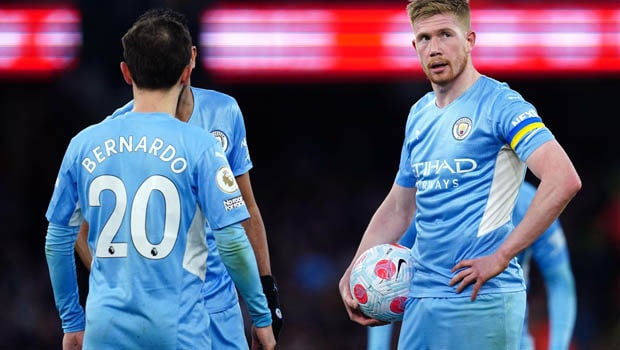 After Manchester United received a drubbing of 4-1 in the derby clash against Manchester City at the City of Manchester Stadium, Manchester on Sunday, a lot of football boffins reckon that the Red Devils gave up, especially in the second half after they were trailing by 3-1.

It was a dominating performance from the home team as they had 70% of the possession whereas they also took a total of 10 shots on target. On the other hand, the tourists could only manage two shots on target and they were utterly dominated.

Meanwhile, Kevin de Bruyne played a key role in his City’s win as he scored a brace. Belgium forward found the back of the net in the fifth and the 28th minute.

Speaking to press post-match, the star striker said, “It’s difficult to say [whether United gave up], when you play a pressing style it’s very hard to adjust to it so maybe it seemed like they did give up a little,’ De Bruyne explained. ‘It’s very hard to do it for 90 minutes as a team.”

He added: “First-half it was a bit more difficult, they pressed us a bit higher than they normally do but in the second half we found the spaces where we needed to be. I was watching the last 10 minutes and it felt like they were a little bit out, so the spaces got a bit bigger. I wouldn’t necessarily say that they gave up, it’s hard to say that.”(H/T Metro.co.uk)

The Red Devils could only manage 21% possession in the last 25 minutes of the game and they looked at sea against a formidable unit. Manchester United has been struggling and they will look to turn the tables in the upcoming matches.

Manchester United will next face Tottenham Hotspur on Saturday at Old Trafford.