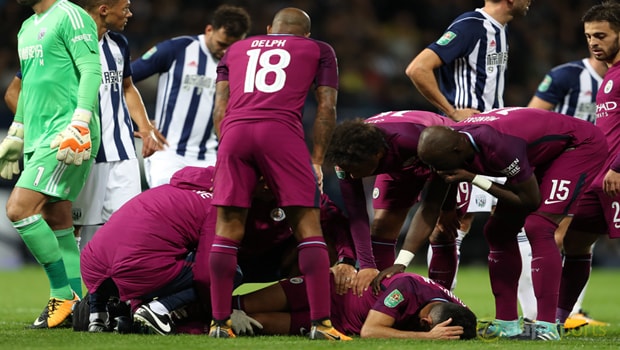 Manchester City’s Ilkay Gundogan has confirmed the knee injury he picked up in Wednesday’s Carabao Cup win over West Bromwich Albion is nothing serious and he hopes to be back training in the near future.

Germany international Gundogan looked in impressive form at the Hawthorns and he was running the show in midfield before being cynically challenged from behind by Claudio Yacob, who was shown a yellow card.

The 26-year-old was forced to leave the field with the visitors leading 1-0 and City lost the control they had on the game, allowing the Baggies to score an equaliser and put the match on a knife edge.

However, Leroy Sane was able to grab his second goal with a brilliant curling finish and book the Citizens’ spot in the fourth round of the competition, where they will face Wolves at the Etihad Stadium.

Manager Pep Guardiola revealed on Thursday the injury to Gundogan was not as bad as first feared and the midfielder has now helped to ease any worries that supporters had regarding his fitness.

He wrote on his official Instagram account: “Hi guys, thank you for all your messages once again.

But I can tell you my injury is nothing serious. The medical staff found no significant damage and it was not the knee which was injured before.

“I only suffered a knee sprain and hope to be back on the training pitch soon! I will keep you updated here.”

Saturday’s home clash against struggling Crystal Palace will come too soon for Gundogan but he will be hoping to be back as soon as possible for the Premier League leaders.

City are firm 1.14 favourites to pick up all three points against the Eagles, a draw is priced at 8.50 whilst Roy Hodgson’s men, who are yet to score a goal in the league this season, are quoted 19.00.