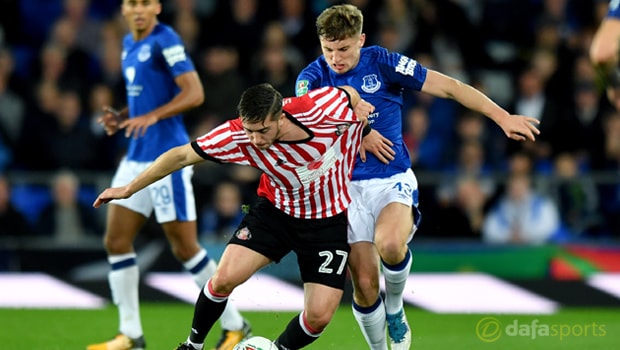 Lynden Gooch says it is vital Sunderland put a stop to their troubles at the Stadium of Light on Saturday and pick up all three points against title-challengers Cardiff City.

It has been a summer of change at Sunderland following their relegation from the Premier League with Simon Grayson making the switch from Preston North End to replace manager David Moyes.

The Black Cats made no less than 10 new signings whilst 12 players were shown the exit door but despite the squad overhaul the results have been poor in the early stages of their campaign.

Four defeats from their last five Championship matches – a period that has seen the north-east outfit pick up just one point – has seen the club slip to 21st in the table, just one place and two points above the drop zone.

The midweek Carabao Cup third-round loss to Everton has added to the pressure and, normally, a return to home turf would be a welcome relief, but not for this team.

Sunderland have gone 16 games across all competition without a win at the Stadium of Light, a run stretching over nine months, and Gooch insist they players must stop the rot against Cardiff.

“We’re back at home, so we’ve got to try and make sure we take the initiative to get the three points,” he told reporters.

“Hopefully, being back at home will bring the best out of us, we know the task at hand.

“We haven’t won at home for a long time now and we need a win, simple as that. We need three points.”

Cardiff are sitting third in the table, having won five of their eight matches, and they are 2.50 favourites to pick up all three points, a draw is priced at 3.20 whilst the hosts are a 2.88 chance.