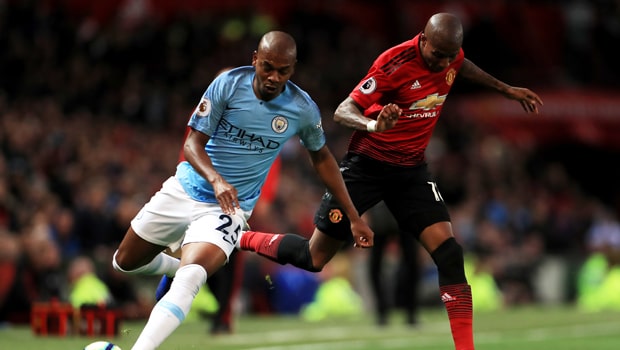 Manchester City are ‘competing for every ball like animals’ in their quest to retain the Premier League crown, says midfielder Fernandinho.

The champions have been forced to display the spirit that comes with that tag on more than one occasion, says the Brazilian.

A 2-0 victory in Wednesday’s Manchester derby away at rivals United has seemingly paved the way for Pep Guardiola’s side to retain their crown. They now lead Liverpool by a single point, each team with three games remaining.

City have Burnley (a), Leicester (h) and Brighton (a) left, knowing three wins will be enough. Fernandinho recalled the narrow win over rivals Liverpool in January and how vital that was.

“If you look back to January, they [Liverpool] could have been 10 points clear after our game. We didn’t want that,” he said.

“We reduced the gap to four points and now we are one point up. That is the way the Premier League is going to be decided and I hope we can do our job and win those three games, and be champions again.”

After the pain of a controversial Champions League exit against Tottenham, City have responded with crucial league wins over Spurs and United.

The Old Trafford success was an 11th straight league win for Guardiola’s side, and Fernandinho knows the importance of their latest two victories.

“We showed the desire in competing for every ball like animals,” he added.

“I think this is the spirit of a team that wants to be champions. “It was not just Wednesday – in general every game, especially last Saturday, after the ‘defeat’ against Tottenham, in the way we played from the first minute.”