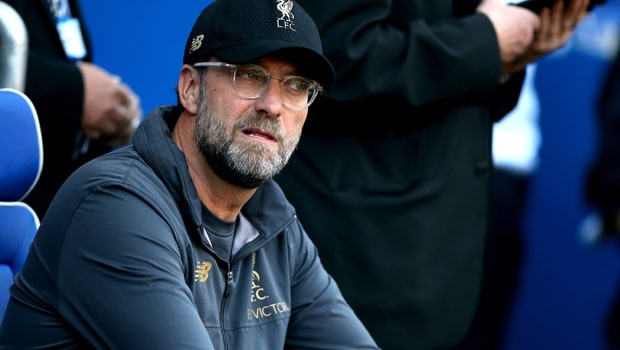 Jurgen Klopp has challenged his Liverpool side to take the title race down to the last day of the Premier League season.

The Reds suffered a setback with Manchester City winning their game in hand at Old Trafford, beating Manchester United 2-0 in midweek. With both sides now having three games remaining Pep Guardiola’s side have a one-point lead at the top of the table.

Liverpool have the chance to go back to the top with victory at home to Huddersfield on Friday night and Klopp says he expected City to beat United and insisted the title race is not over.

The Reds boss told a press conference ahead of the Huddersfield game: “I watched it [the Manchester derby] and I was completely calm. Finally this game was played, for months there was always one game in hand.

“Now it’s clear, we are one point behind City and if we win our next two games then it will be decided on the last game. That’s pretty special.

“But first we have to win our games, which is difficult enough. We are concentrated on the next one, against Huddersfield.”

If Liverpool beat the already-relegated Terriers at Anfield, they will be top, though City can overtake them again with victory away at Burnley on Sunday.

Liverpool then travel to Newcastle next weekend with City at home to Leicester, while the Premier League comes to its conclusion the weekend after with Liverpool hosting Wolves and City away to Brighton.

Klopp accentuated the positives in his press conference, adding that his team were 25 points behind City last season and that, whatever happens in the title race, it is just the first step.

The Liverpool boss denied that he would use the Huddersfield game as an excuse to rest players before next Wednesday’s trip to Barcelona in the first leg of the Champions League semi-final.