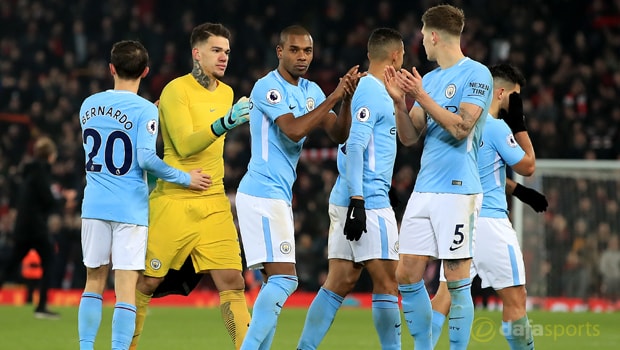 Bernardo Silva has hailed the impact goalkeeper Ederson has made at Manchester City.

The pair were both signed in the summer and have known each other for some time, having both come through the ranks at Benfica.

After Pep Guardiola’s public doubts over Joe Hart and the inconsistent form of Claudio Bravo, Ederson has provided a calming presence between the sticks after the club paid out a record fee for a goalkeeper to acquire him.

Not only is he a fine shot-stopper, the 24-year-old has also earned praise for his ability to play out from the back, often starting attacks with his range of passing.

Having only previously played in Portugal, questions were asked as to how he would adapt to the Premier League but he has looked a natural fit in the City goal.

The Brazilian’s form has helped the Citizens establish a 12-point lead at the top of the table ahead of Saturday’s visit of Newcastle.

Silva admits he has been impressed by his team-mate, describing him as the “perfect goalkeeper” for the Citizens.

“I think everybody realises Ederson is one of the best goalkeepers in the world,” he told the club’s official website.

“With his hands, with his feet… he is so calm and so good at what he does.

“He is the perfect goalkeeper for how our team plays – he is like another outfield player for us because the keeper has to be able to play with his feet and he’s been doing an amazing job for us.”