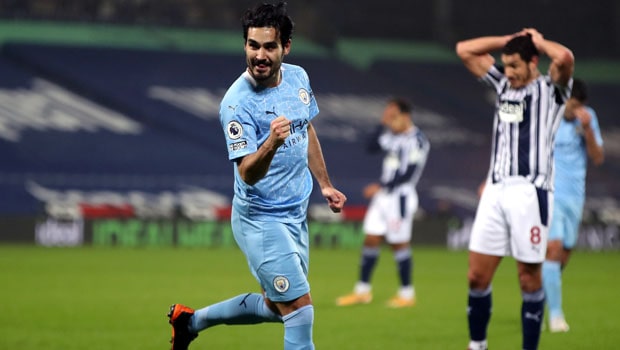 Ilkay Gundogan scored twice in Manchester City’s 5-0 thrashing of West Bromwich Albion at the Hawthorns while Arsenal came from behind to defeat Southampton 3-1 at the Saint Mary’s Stadium in the Premier League on Tuesday evening.

At the Hawthorns, Manchester City continued their impressive run of form to win 5-0 to go to the top of the English Premier League table, one point ahead of the city rivals Manchester United.

Pep Guardiola’s men are on an 11-game winning streak in all competitions and they have not lost since their 2-0 deficit at the White Hart Lane to Tottenham Hotspurs on November 21, 2020.

Ilkay Gundogan scored the first goal after just 6 minutes into the game, Joao Cancelo made it 2-0 in the 20th minute before Gundogan completed his brace on the half-hour mark.

There was time for one more in the first half as Raheem Sterling provided the assist for Riyad Mahrez’s goal to make it 4-0.

Raheem Sterling scored the fifth goal of the game in the 57th minute to ensure a 5-0 victory for Manchester City.

Meanwhile, Arsenal got their revenge for their 1-0 loss to the same opponents in the FA Cup at the weekend with a 3-1 win at the Saint Mary’s Stadium on Tuesday.

Stuart Armstrong gave the home side the lead in the 3rd minute before Nicolas Pepe equalized 5 minutes late.

Bukayo Saka then gave the lead in the 38th minute. He also provided an assist for Alexander Lacazette in the 72nd minute to ensure the win for the Gunners.

On Wednesday, Chelsea will host Wolves at Stamford Bridge while Manchester United welcomes Sheffield United to the Old Trafford.

In other matches, Burnley and Aston Villa, Brighton v Fulham and Everton against Leicester City.