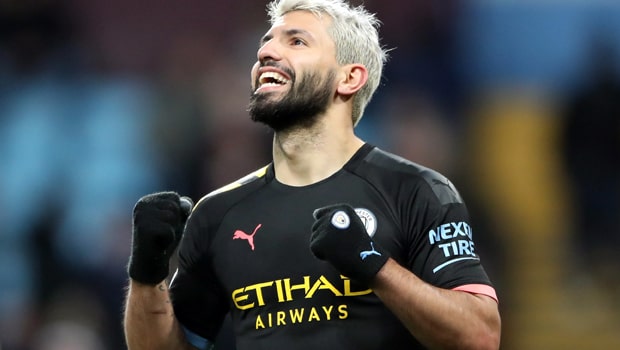 Argentine forward, Sergio Kun Aguero was in sparkling form as Manchester City tore apart host Aston Villa 6-1 at the Villa Park in one of the weekend’s English Premier League games.

Pep Guardiola’s men still trail Liverpool by 14 points although they now lead Leicester City by 2 points after the foxes lost surprisingly at home to Southampton 2-1 a day before.

While Liverpool still has a game in hand which could eventually put the point gap to 17, Pep Guardiola will be glad that his side has gone on a five-game winning streak in all competitions and hope the momentum will be kept should Jurgen Klopp’s side slip anytime soon.

The rout started as early as the 18th minute as Algerian Forward, Riyad Mahrez put his name on the scoresheet from an Aguero’s assist.

Six minutes later, he completed his brace this time off an assist from Gabriel Jesus after which Aguero started his 12th career Hattrick with his first goal of the game in the 28th minute.

At half time it ended 4-0 for City as Gabriel Jesus also managed to add his name to the scoresheet from a Kevin De Bruyne’s assist which was the Belgian’s second on the night.

From there on, it was certain where the result was heading and the second half started in favor of city who scored their fifth of the game when Aguero scored his second of the game just three minutes to the hour mark.

He completed his hat-trick in the 81st minute, but El-Ghazi got the home fans some consolations when he scored from the spot in stoppage time.

The result is Villa’s third loss in its last five games with a draw, and one win the other result. Aston Villa are now in the drop zone with 21 points in 18th position, 1 point from safety.

Manchester City are strongly fancied at 1.11 to win their next fixture against Crystal Palace, while Palace are backed at 25.46.