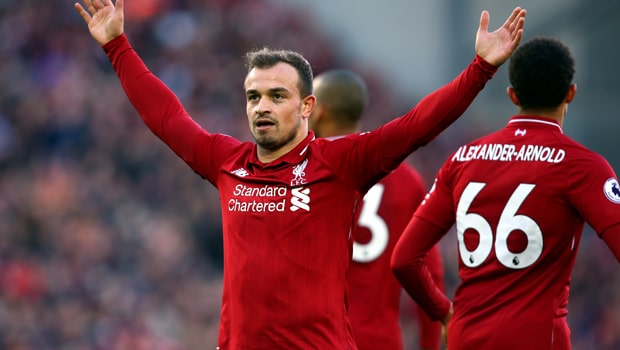 Xherdan Shaqiri says he is up to speed with Liverpool’s style of play and is hopeful of being handed more opportunities by manager Jurgen Klopp as the season progresses.

The Swiss international made the switch to Anfield from Stoke City for £13.5million after the Potters’ relegation to the Championship but he struggled to make an instant impact with the Reds.

Shaqiri, who won six trophies during his time at Bayern Munich from 2012-2015, had to wait until September for his first Premier League start for Liverpool and he has only racked up 73 minutes of Champions League football so far this term.

However, the 27-year-old has been used from the bench more regularly over the past month and he opened his account in the 4-1 victory over Cardiff City at the end of October.

Speaking about life on Merseyside, the forward believes he has taken time to get used to Klopp’s style of play although he is now ready to show exactly what he can do.

“I think I am settled now and showing my best form,” Shaqiri said.

“It is always important when you join a new club to play well, but also to win games, and obviously we have been doing that.

“It takes time for me to understand what the coach wants and also for my team-mates to understand me. I am getting more minutes on the pitch now and I feel I am getting better. It’s great being back in the Champions League. This was what I wanted.”

Liverpool return to action on Tuesday when they make the trip to Red Star Belgrade for Champions League action and the visitors are 1.20 favourites to win, a draw is priced at 7.00 while the hosts are massive 15.00 outsiders.