Posted by Vincent Henderson on November 5, 2018 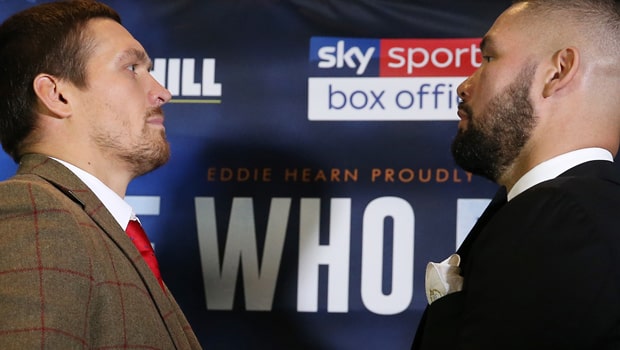 Promoter Eddie Hearn admits Tony Bellew has 100 per cent belief that he will end his career on a high by beating undisputed cruiserweight champion Oleksandr Usyk this weekend.

The Liverpudlian will aim to win all fight belts this week at the Manchester Arena as he tries to end Usyk’s unbeaten run.

Bellew comes into the fight as the more experienced man and he is also full of confidence after beating David Haye on two occasions.

Usyk is the heavy favourite to hold onto all of his belts but Hearn insists his man has no doubts about his chances.

He told Sky Sports: “Just 100 per cent belief that he’s going to do it. He can visualise it, he can see it, he can feel it.

“He just believes it’s going to happen, and I think that’s part of the process – the key to making it happen, is believing it.

“It’s not going to be easy, it’s going to be epic. I think it goes down as the greatest win, from a British fighter, of all time.

“It’s the ultimate legacy fight, the ultimate career-defining fight, and that’s what is really spurring him on.”

Bellew has had 30 fights so far in his professional career and Hearn insists he wants his man to retire no matter what the result is.