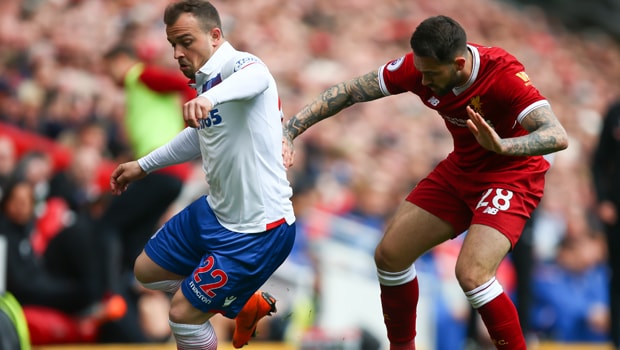 New Liverpool signing Xherdan Shaqiri has revealed he was close to joining the Reds earlier in his career and he’s happy to finally be at Anfield.

Currently on holiday after appearing at the World Cup, Shaqiri has agreed what Liverpool described as a “long-term” contract after signing from relegated Stoke City for a fee believed to be in the region of £13m.

Shaqiri has proved enigmatic at times in the past but he says joining Liverpool is a chance to improve and he is relishing the chance to work under Jurgen Klopp.

“As a player you always want to be on the biggest stage in football.

A few years ago I wanted to come too but it didn’t happen. I’m really happy that now I’m finally here.

“I want to improve myself too, I want to be with the best and I want to win titles.

That’s what I’m here for.” He is Liverpool’s third summer signing following the big-money arrivals of midfielders Naby Keita and Fabinho.

According to Klopp, adding a player of Shaqiri’s quality in the circumstances following Stoke’s demise is a ‘smart’ move as he seeks to add competition for Mohamed Salah, Roberto Firmino and Sadio Mane.

“I think the English phrase to explain the decision to sign Xherdan is a ‘no-brainer’.

When someone like him becomes available in this way you have to react if you are smart – and we have,” said Klopp.

“He has speed and ability, has the right amount of arrogance on the football pitch, real bravery to want the ball and influence things.

To play for us these are mandatory requirements.” Liverpool are 6.00 second-favourites to win the Premier League title next season, with defending champions Manchester City 1.60 to retain their crown.