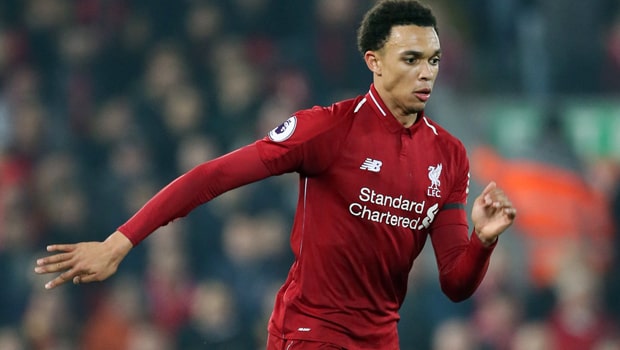 The Reds surrendered top spot to champions Manchester City last weekend, the latter winning at Bournemouth while Liverpool were held scoreless in the Merseyside derby at Everton.

Pep Guardiola’s team now lead by a single point but, with nine games left, Alexander-Arnold says Liverpool must still remain focused only on winning their own games.

“There is not so much a nervous tension, just eagerness to get it going,” said Alexander-Arnold.

“Not until four or five games left will we start to look forward a little. It is important right now to stay focused.”

Much has been made recently of the pressure imposed on Liverpool by the Anfield faithful, so eager to see their title famine put to an end. Dealing with expectation is normal, says the England full-back.

“At times you can feel the supporters’ expectations. We know Liverpool fans are so passionate.

We can hopefully give them performances that they can go home and talk about the next day. That is the main thing for us – to give them a reason to come back,” he added.

For many of Jurgen Klopp’s squad, this season is breaking new ground as they have never before come down the stretch in a potential title-winning campaign. Win or lose, Alexander-Arnold is eager that they must enjoy and learn from their experience in equal measure.

“We know how hard it is to win a league title. You have to be consistent across a full season.

Quite a few of the lads have never been in this position before, including myself. It is important for us to enjoy it, learn from it and just see how it goes,” he added.