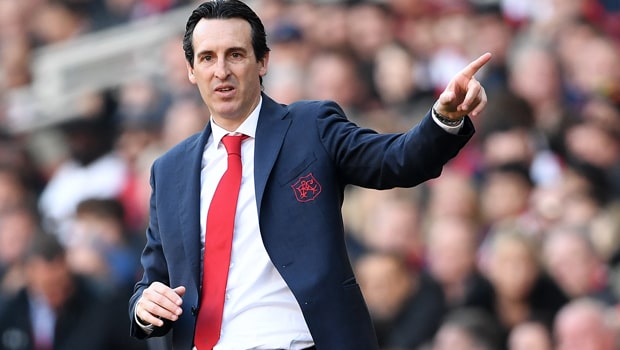 Unai Emery felt a red card for Sokratis Papastathopoulos had changed the course of the game after watching Arsenal lose 3-1 at Rennes in the Europa League.

The Gunners made a dream start to the last-16 tie in France, going in front through Alex Iwobi’s early strike but, for the second round running, they lost away from home in the first leg as Rennes built a nice lead to take the Emirates.

Arsenal arrived at Roazhon Park having never lost an away game against French opposition. Papastathopoulos was booked for a foul on Hatem Ben Arfa and got his marching orders four minutes for the break when he pulled Ismaila Sarr’s shirt.

Benjamin Bourigeaud delightful free-kick drew Rennes on terms immediately, while an own-goal from Nacho Monreal put the hosts ahead.

A late header from Sarr left Emery and Arsenal in more trouble. Having overturned a 1-0 reverse against BATE Borisov in the previous in the round with a 3-0 home success, Emery isn’t losing faith in his team.

“The red card changed the game more than we wanted,” Emery said.

“The first 40 minutes we controlled, we scored, we didn’t concede good chances. I think we can do better and I have confidence with our players and our supporters helping us.”

The Arsenal boss wasn’t laying blame on Papastathopoulos for the red card, but rather he suggested the remaining outfield players hadn’t coped as they should with a numerical deficit.

“A red card can come but after we must learn also to play with one less player,” Emery added.