Posted by Vincent Henderson on March 9, 2019 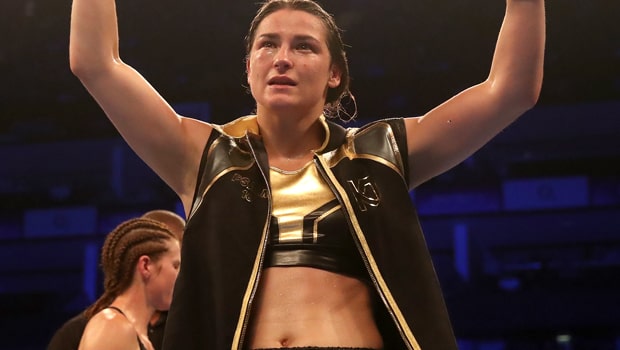 Katie Taylor is on track to become a ‘global star’, according to promoter Eddie Hearn.

The Irish boxer is a ‘trailblazer in shifting the boundaries for the women’s game and is inching closer to becoming the undisputed lightweight champion of the world.

Taylor will be one success away from that landmark if she defeats Rose Volante in Philadelphia on March 15.

A dominant force in the amateur ranks, Taylor was an Olympic gold medallist at the London 2012 Games.

Since joining the professional ranks she has racked up 12 straight victories while collecting the WBA and IBF belts along the way.

“She’s been incredible,” Hearn told Sky Sports. “She’s a trailblazer, isn’t she. She’s the reason that women’s boxing has broken through the boundaries with the broadcasters and sponsors.”

According to Hearn, the Bray boxer is transcending the divide between the sexes in boxing.

“She is arguably one of the most entertaining fighters in the world right now. She’s my favourite fighter in the world,” he added.

“Forget men and women, she can fight, she can entertain, and she’s a national hero in Ireland.

“March 15 is another step to her becoming a global star on the world stage.”

WBO champion Volante is yet to suffer a defeat in 14 bouts, with her two previous title defences ending in stoppage victories. She could prove to be the biggest test of Taylor’s pro career.

“It’s another unification fight, it’s a chance for her to add the WBO championship to her mantelpiece,” said Hearn.

Volante is 13.00 to defeat Taylor, who is favourite at 1.05 to carry on her winning streak.