Titles the target for Liverpool forward 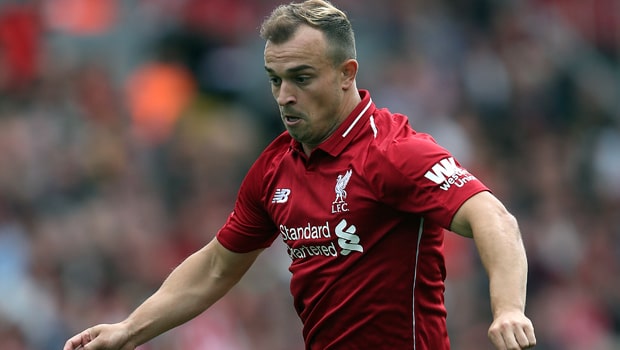 Liverpool summer signing Xherdan Shaqiri says the Anfield club need to develop a winning mentality if they are to end their trophy drought.

Shaqiri won the Bundesliga twice during his time with Bayern Munich and was a member of their Champions League winning squad.

The Swiss international, who joined the Reds from Stoke, feels Liverpool should take inspiration from Bayern as they bid to land a first title since 2012.

“Liverpool need to have the goal to play for titles,” he told reporters ahead of Saturday’s clash with Tottenham.

“We are a big team – big teams have to have the goal to win titles.

“It’s difficult in the Premier League, because you have a lot of big teams, so competition is there. You need to have a really, really good season to compete. ”

At Bayern they only have the mentality of winning titles. Liverpool are one of the biggest teams in the world.

“Last year they had a very good year. Sadly, they didn’t win a title, but now we try to make a step forward and win honours. That’s the most important goal now. To win titles.

“We need to keep working hard. We are still a young team. Every player wants to go forward and try to be better and to help this big club to be successful.

“To be successful you need to play for titles. That has to be our aim.”

Liverpool are the current league leaders after picking up a maximum 12 points from their opening four games and they are 3.40 to win the Premier League outright.

The Anfield outfit are 11.00 to go one better and win the Champions League this season after finishing as the runners-up last year.