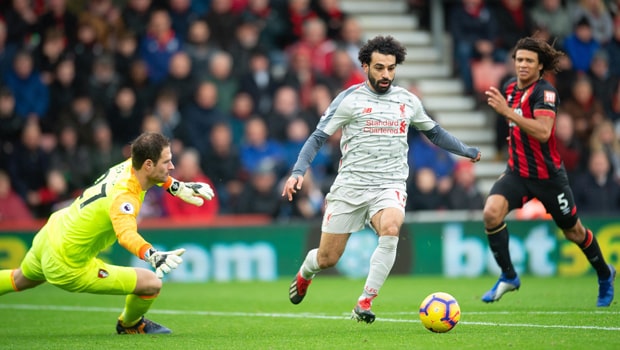 Mohamed Salah fired a hat-trick as Liverpool cruised past Bournemouth 4-0 at the Vitality Stadium to go top of the Premier League.

Jurgen Klopp’s men were victorious in Saturday’s early kick-off, leapfrogging champions Manchester City, and they maintained top spot when Pep Guardiola’s outfit lost for the first time this season at Chelsea later in the day.

It was the end of a hugely satisfying week for the Reds that witnessed them taking a perfect nine points from nine in under six days.

A fortuitous Merseyside derby win over Everton at Anfield arrived Sunday when Divock Origi scored after an error from Jordan Pickford in stoppage time, before they came from behind to defeat Burnley 3-1 at Turf Moor in midweek.

There was a hint for fortune about their opening goal on 25 minutes at Bournemouth. Salah appeared to be in an offside position when Roberto Firmino hit a 30-yard shot that goalkeeper Asmir Begovic could only push out in the direction of the Egyptian.

Salah’s second was all class and coolness minutes after half-time, slotting neatly into the corner before Steve Cook put through his own net to make it 3-0.

Salah went through on goal 13 minutes from the end and twice went around Begovic before applying another ice-cool finish.

Bournemouth boss Eddie Howe described Salah as “one of the best in the world” afterwards while Klopp praised his team for a key win at a tough ground, though the Reds boss claimed he didn’t know if Salah was offside for that vital breakthrough goal.

“It is clear that everyone knows about the quality of Bournemouth,” said Klopp.

“We had to keep the ball and win the ball back as quickly as possible. We did both very often but not always as they had their moments too, of course.

“I don’t know if it was offside. I’ve not watched it back but we improved in the second half and controlled the game.

It was really nice. Mo Salah scores that goal [the second one] and I don’t think many do in that situation.

“The third goal was again brilliant. It is really cool and it helps of course! We played nice football and the players we brought on did really well.”

Liverpool are now 3.50 to win the Premier League this season, with second-placed Manchester City still favourites to retain their crown at 1.36.