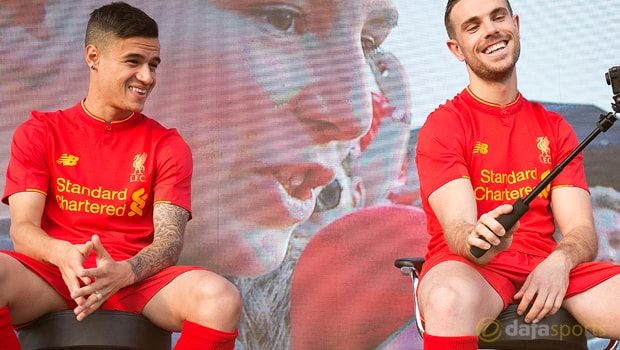 Liverpool captain Jordan Henderson says he is unsure that anything he can say will convince Philippe Coutinho to remain at the club.

The Brazilian appears to have his heart set on a move to Barcelona during this transfer window.

Coutinho missed Saturday’s Premier League opener against Watford with a back concern and has not travelled to Germany for Liverpool’s Champions League play-off in Hoffenheim.

Barcelona had a second bid for the player rejected last week, after which Coutinho officially informed the Anfield hierarchy of his desire to leave.

Jurgen Klopp admits Coutinho’s absence is a ‘blow’ but he insists ‘nothing has changed on one side or the other side’ ahead of the Hoffenheim game.

Henderson said every player in the Liverpool dressing room wants Coutinho to stay at the club and while the England midfielder has talked to the playmaker about staying, he concedes there is not much hope he will be able to instigate a change of heart.

“It’s a difficult situation for Phil and whatever I say won’t help matters,” said Henderson.

“We want Phil to stay because he is a world-class player. Ask anybody in the team – they want him to stay.

“I don’t think I can influence the situation…that’s down to Phil and the club.

“I have had conversations with Phil as he is my team-mate. I’m close to him and I have a lot of respect for him.”

Henderson added that, in spite of Coutinho’s absence, Liverpool have ‘got to take the opportunity’ against Hoffenheim to ensure a first Champions League group stage appearance since 2014/15.