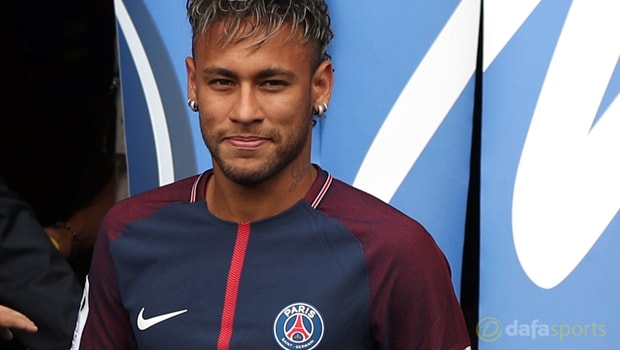 Dani Alves believes Neymar is already proving his worth to Paris Saint-Germain after he scored and provided an assist on his debut against Guingamp on Sunday.

The Brazil international completed his world-record €222million transfer to Les Parisiens from Barcelona earlier this month and he was quick to show off his talents in France, providing an assist for Edinson Cavani, before scoring himself as PSG ran out 3-0 winners at the Stade du Roudourou.

Neymar’s performance certainly caught the eye of team-mate Alves, who is convinced PSG are a better team now they have signed the 25-year-old.

“I believe he showed why PSG wanted to sign him [Neymar], to be decisive as he was and help our team achieve good results,” Alves said.

“He performed well, and all of us had great expectations about this match too.

We wanted him to have his debut and help us, and no doubt we’re stronger with him now.”

Alves, who is also a new arrival at the Parc des Princes this summer, believes it is not just Neymar’s talent that makes him a world class player, as he also works hard to make things happen for the team.

“A player cannot rely only on his name to make a difference, but also has to work hard and make things happen on the pitch,” Alves added.

“And that’s Neymar’s differential, he’s not only a global name, he deserves his greatness.”

Neymar will now be hoping to make his home debut for Unai Emery’s side when they take on Toulouse in Paris next Sunday.