Black Cats boss hoping trio will be back in action soon 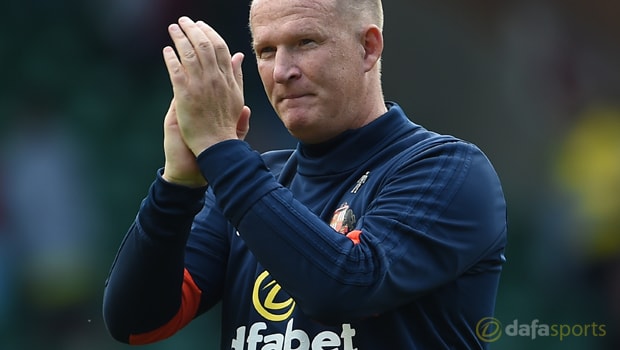 Sunderland manager Simon Grayson is hoping for good news on the injury front ahead of their trip to face Sheffield Wednesday.

The Black Cats go to Hillsborough on Wednesday evening, buoyed by Sunday’s 3-1 win over Norwich City.

Ahead of the first midweek assignment of the new season, Grayson has provided updates on the progress of Josh Maja, Jack Rodwell and Bryan Oviedo.

The former is going to see a specialist as he continues to recover from a knee concern and his boss is hopeful it will be good news.

Rodwell and Oviedo meanwhile came through an under-23s win over Tottenham Hotspur although they are deemed unlikely to slot into the Sunderland squad for the Owls trip.

Maja impressed throughout preseason, scoring four times in six friendlies, but has since been forced to watch on after sustaining a knock at Bradford last month.

“Josh is seeing a specialist tonight to clear up one or two things with his knee,” Grayson said.

“Hopefully it is not negative news, but it is something that hasn’t quite healed up as we thought it would when he first sustained it.”

“They [Oviedo and Rodwell] all came through the game [against Spurs], so we have the same squad to pick from that was available at Norwich,” Grayson added.

“Oviedo and Rodwell have trained again today, so we are in good shape at this moment in time.”

Sunderland are 3.50 to take three points from Hillsborough, with Sheffield Wednesday 2.10 and the draw 3.40.