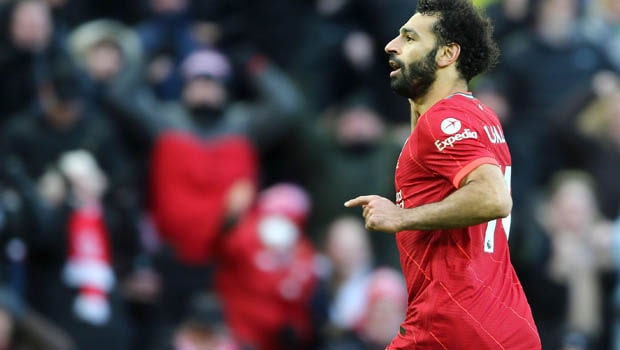 Mohamed Salah was delighted after he scored his 150th goal for Liverpool against Norwich City at Anfield on Saturday. Milot Rashica gave the lead to the tourists in the 48th minute but the hosts bounced back in the 64th minute as Sadio Mane found the back of the net.

Salah gave the lead to the Reds after three minutes whereas Luiz Diaz put the match to bed as he scored in the 81st minute. Thus, Liverpool was able to bag three crucial points as they defeated Norwich City by 3-1.

Speaking to Premier League Productions (via Liverpoolfc.com) following the game at Anfield, Mo Salah said: “We were struggling in the beginning when we conceded the goal but I think we played good football [in the] first half. The second half, we conceded the goal, so the game became tougher.”

He added: “But we managed to come back and it’s a great result. Of course, I’m happy to score 150. I’m always proud to score for this club, and the most important thing is to win games, which is what we did today.”

After scoring his 150th goal for Liverpool, Salah became only the 10th club player to reach the milestone. Furthermore, he became the second-fastest to get to the landmark in 233 matches. Roger Hunt had achieved the same record in 226 matches for Liverpool and he is the fastest to the feat.

Meanwhile, Mohammed Salah has been in top form in the ongoing season for Liverpool. The winger has scored 25 goals and he has provided nine assists in 30 appearances across all competitions. Thus, Salah will like to continue the same form for the Reds in the upcoming matches.

Liverpool will next face Leeds United at Anfield on Wednesday.