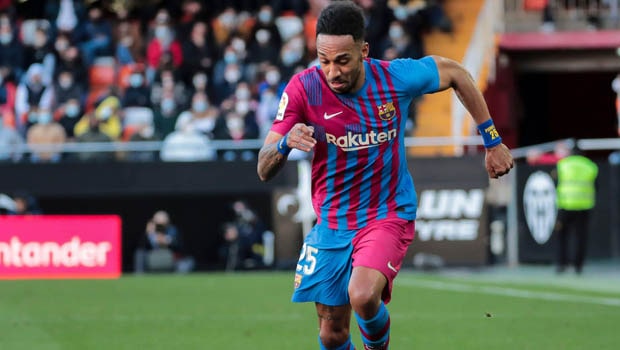 Former Arsenal striker Pierre-Emerick Aubameyang scored a hattrick as Barcelona ran out 4-1 winners over Valencia in the La Liga on Sunday.

The win comes on the back of a disappointing 1-1 draw with Italian side Napoli in the Europa League during the week. The win also extends Barcelona’s unbeaten, which started in the first week of December, while Valencia are winless in seven matches so far.

Aubameyang, who joined Barcelona in January on loan, was hyperactive from start to finish breaking the deadlock from a Jordi Alba pass in the 23rd minute. He provided a pass from which Frankie De Jong scored, but the goal was cancelled for offside.

However, Barcelona and De Jong would not be denied a second when he scored in the 32nd minute before Aubameyang scored his second goal six minutes later. Barcelona may have gone into the break with a 3-0 scoreline, but Valencia were unlucky to have two goals called off by the VAR.

Valencians scored their consolation seven minutes after the break thanks to Soler. However, Pedri hit a long-range effort with his first touch in the second half, but his goal three minutes after his introduction was helped on its way in by a deflection of Aubameyang in the 63rd minute.

The Gabonese was making is first La Liga start since joining the club, and his impact was immediately noticed by Sergio Busquets, who had nothing but praises for the ex-Dortmund star.

“Since Aubameyang arrived, he has been working hard. We know he hasn’t played many minutes this season. He is a fabulous player, and having him in the squad, having come here for free, is really positive for us. It’s been an important victory today,” Busquets said.

Barcelona now has eleven wins from 24 La Liga games this season, and they sit fourth on the table with 42 points, fifteen points behind league leaders Real Madrid.