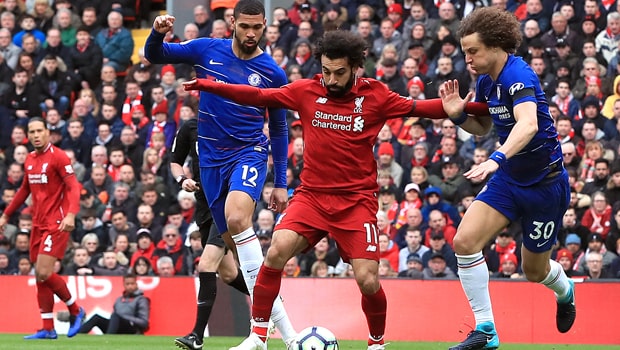 Mohamed Salah believes that Liverpool will be Premier League champions if they win their final four games.

The Reds reclaimed top spot on Sunday with a 2-0 win over Chelsea at Anfield, second-half goals from Sadio Mane and Salah taking care of the Blues.

Man City had earlier gone top with a 3-1 win at Crystal Palace but Liverpool are two points clear once more, albeit with a game more played.

Salah thinks Liverpool will finish top if they beat Cardiff (A), Huddersfield (H), Newcastle (A), and Wolves (H) between now and season’s end, with champions City facing Tottenham (H) and neighbours Manchester United (A) in four days next week.

“In my opinion, yes,” Salah told Sky Sports when asked if four wins would be enough to land the title. “We just need to focus on our game and hope Manchester City will lose points.”

Salah’s stunning goal against Chelsea was his 21st of the season in the Premier League, moving him joint-top of the scoring charts with Sergio Aguero.

His form hasn’t been as spectacular as last season but he feels the way teams are marking him is helping his team-mates to thrive.

“It’s different when other teams have two or three players on me. [Sadio] Mane is having a very good season, so is [Roberto] Firmino, they are scoring more goals than last season, because the attention on me is giving them more freedom, and I am very happy for them,” he added.

“It helps the team to score more goals, when they focus on my side the other side is free, we are a team and we focus on the team.”

Liverpool are 2.20 to win the Premier League, with champions Man City favourites at 1.67.