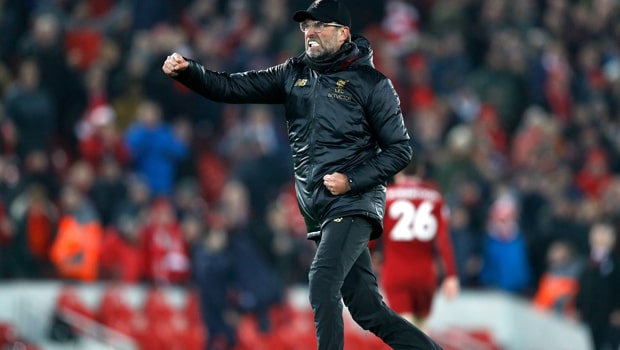 Jurgen Klopp felt Liverpool had hit a key milestone after their 4-3 win over Crystal Palace at Anfield saw them breaching the 60-point mark.

The Reds had to come from 0-1 down at half-time as Palace looked to repeat last month’s shock away win over champions Manchester City.

Only Manchester City (2017/18) and Chelsea (2005/06) have amassed more Premier League points than the Reds after 23 games previously and Klopp acknowledged the latest milestone.

“The result is massive. We have 60 points now, it’s crazy,” Klopp said. “It’s an important number, I am really proud.”

James Milner was dismissed for his second yellow card in the 89th minute of an enthralling contest, with the home side leading 3-2. Mane would add a fourth in stoppage time though there was still time for Meyer’s response.

Klopp paid tribute to Palace for their part in the game and credited his own team for remaining calm when they found themselves trailing at the interval.

“It’s a massive relief. We knew for different reasons the game would be difficult. They are really good at counter-attacks and set-pieces,” Klopp added.

“Wilfried Zaha is a world-class player and he gets into a one-on-one situation and we’re one down.

“We had to stay positive, being one down is not a massive blow, we just needed to win the second half and did what we had to do. We got lucky for 3-2 and with all the set pieces they’re still a threat so it stayed interesting until the end.”

Liverpool are favourites at 1.67 to win the Premier League title this season, with Man City now 2.20 to hold onto their crown.