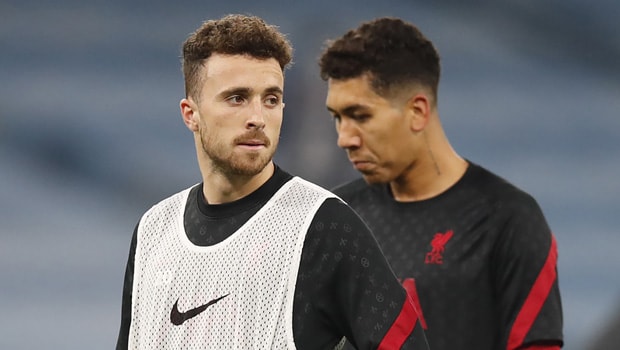 Liverpool’s Portuguese striker Diogo Jota is out for several months after he sustained a knee injury in the UEFA Champions League on Wednesday against Danish side Midtjylland.

His injury will be a major hit for Jurgen Klopp’s side after revealing that the Reds would be without the £41 million signing from Wolves for two months.

The 24-year-old has been fantastic for Liverpool since his arrival this summer, scoring nine goals in 17 matches.

However, Liverpool will be without the forward until February after he underwent scans to assess the damage. He joins Virgil van Dijk and Joe Gomez on the injury list with long-term knee injuries.

“He’s doing exceptionally well at the moment, absolutely. But to keep that standard we have to work really hard, we have to keep him in a good shape, score goals because the other boys do that usually. For us, the most important thing was that we don’t have to bite our nails pretty much in each game and hope they [Salah, Mane and Firmino] somehow come through and we can bring them in the next game again – especially not in this season.” Klopp said.

Meanwhile, FIFA revealed the list for the 2020 Best Awards, and Jurgen Klopp was named among the top 3 contenders for the coach of the year.

He was nominated alongside fellow German and Bayern Munich manager Hansi Flick and Argentine Marcelo Bielsa, who heads Leeds United in the English Premier League.

Liverpool failed to beat Fulham at the Craven Cottage on Sunday with a 1-1 draw in the English Premier League.

The home side had taken the lead in the first half, but a second-half penalty secured a point for the English Premier League’s defending champions.