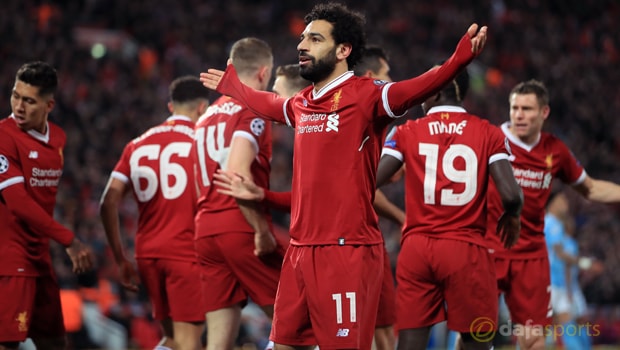 Liverpool will wait as long as possible to see if top scorer Mohamed Salah will be fit enough to start Tuesday’s Champions League quarter-final second-leg with Manchester City at the Etihad Stadium.

Egyptian international Salah, who has netted 38 goals in all competitions this season, including the opener in Liverpool’s 3-0 victory over City during the first-leg, is a major doubt for the contest due to the groin injury he picked up at Anfield six days ago.

The 25-year-old subsequently missed Saturday’s goalless Merseyside derby draw with Everton in the Premier League, but after training with fitness coaches over the weekend, he was able to join in with the rest of the squad for the first-team training on Monday.

Reds boss Jurgen Klopp admitted they are still not sure whether Salah will be fit enough to start or even feature on Tuesday, but they will not make a decision until as close to kickoff as possible.

“(He is) not sure 100 per cent. He was yesterday with the athletic coach, training,” Klopp said.

“At 5pm we train at Melwood and we will see if he can be part of the training.

(It’s) rather yes than no. Then we have to wait for the reaction, until tomorrow, and then we will make a decision.”

Left-backs Andy Robertson and Alberto Moreno are also doubts for the contest, but Klopp is hopeful all three players will be fit enough to feature.

The German coach told the club website: “With Mo, Robbo and Alberto, we have to wait a little bit but of course [we have] big hope they will be back.”

Liverpool are priced at 1.13 to reach the Champions League semi-finals for the first time since 2008, while City are available at 6.00 to stage an almighty comeback and book their place in the last four.