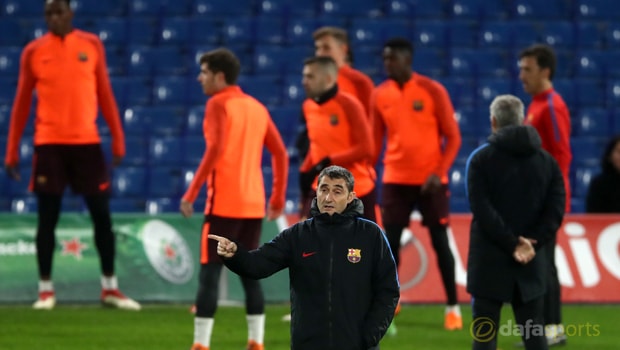 Ernesto Valverde insists Barcelona still have work to do if they are to book their place in the semi-finals of the Champions League.

The Blaugrana will head into the second-leg of their quarter-final tie with Roma at the Stadio Olimpico holding a healthy 4-1 advantage from last week’s reverse match.

Many people believe Barca’s passage through to the last four is nothing more than a formality, but Valverde insists nothing is decided just yet and the last thing his side can afford to do is head into Tuesday’s contest believing the job is already done.

“The main error we could make is thinking we’re in the semis already,” Valverde told reporters.

“We’re certainly not overconfident. Speculating about the result is dangerous.”

The former Athletic Bilbao boss certainly knows Roma have the tools to hurt Barcelona, but he believes, with Lionel Messi in his ranks, that his side also have the ability to put the tie to bed.

They’ve got good players, though, and we have to be ready for that,” the 54-year-old added.

“We know that Leo [Messi] is always going to be able to be decisive in the game. There are reasons to be cautious of them, too – Dzeko for example.”

Barcelona are priced at 1.67 to win Tuesday’s contest in the Italian capital, while Roma are available at 4.75 and the draw is on offer at 4.00.