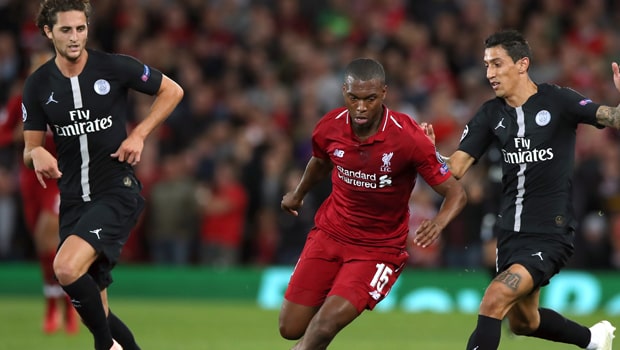 Liverpool striker Daniel Sturridge has thanked manager Jurgen Klopp for the faith he has shown in him.

The striker was heavily linked with a summer move away from Anfield as many speculated he was surplus to requirements amid the array of attacking talent Klopp has gathered but, after a promising pre-season, he has kept his place in the squad.

The English striker rewarded for his hard working in training with a first start of the season against Paris St-Germain in the Champion League opener, and he repaid that trust with the opening goal of a thrilling 3-2 win.

James Milner’s penalty put the Reds two clear in the first half but Thomas Meunier pulled one back for PSG before half-time and Kylian Mbappe appeared to have rescued a point before Roberto Firmino scored in stoppage time for the home side.

For Sturridge, it was a nice feeling to play his part and he felt the result was a fair one. “It was a brilliant game, from start to finish.

I thought we defended well. We gave it everything and I think we got the result we deserved in the end,” he said.

“It felt great. It has been a while since I have started in a competitive game for Liverpool so it was great to give my input and help the team get the result.”

Sturridge was clinical in heading past Alphonse Areola in front of the Kop to open the scoring.

While it hasn’t been plain sailing in trying to get game-time ahead of Firmino, Mohamed Salah and Sadio Mane, he suggests Klopp has always been supportive.

“He [Klopp] has belief in me and I’m grateful for that. I have worked my socks off since I came back to the club in pre-season,” Sturridge added.

“For me it is just about taking every game as it comes and not put too much pressure on myself. If I’m not playing I’ll come off the bench and give my all. If I am, I’ll give my all as well. If I’m called upon I’ll give my best for the club, just like everyone else will.”

Liverpool are 8.00 to win this season’s Champions League while PSG are 9.50 following their Anfield defeat.