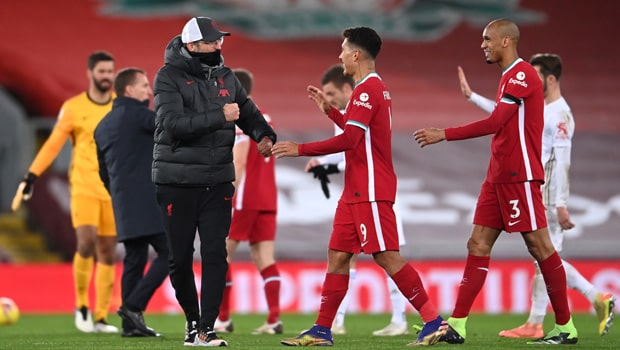 Jurgen Klopp’s side went into the match with various degrees of injury concerns as Liverpool was without Mohamed Salah, who tested positive for COVID-19 during the international break. Virgil Van Dijk, one of the various defenders of the team out injured.

Joe Gomez and Alexander Arnold were also out injured, while Leicester City only had Wilfred Ndidi, Soyuncu, and Amartey out with injury.

Former Manchester United Defender Jonny Evans scored an own goal in the 21st minute to give the home side the lead before Diogo Jota doubled the lead four minutes before half-time.

Roberto Firmino’s goal in the 84th minute gave the club side a comfortable victory as they trail Tottenham Hotspur with 1 point at the top.

Both teams have 20 points from nine matches played this season. Leicester City stays in 4th with 18 points.

Tottenham had beaten Manchester City 2-0 on Saturday. Son Heung-Min and Giovanni Lo Celso found the back of the net as they spoilt Pep Guardiola’s new contract signing, which happened on Friday.

Liverpool will now shift focus to the UEFA Champions League as they are playing against Atlanta on Wednesday.

Leicester, on their part, will play on Thursday in the UEFA Europa League against Portuguese side Braga.

Meanwhile, Arsenal’s Nicolas Pepe was sent off in the Gunners 0-0 draw against Leeds United on Sunday.

The Ivorian defender was involved with Leeds United player Ezgjan Alioski in an incident where he seemed to have headbutted the defender.

Arsenal are 11th on the log with 13 points, while Leeds United are in 14th with 11 points from 9 games this season.

Also, on Sunday, Sheffield d United lost at home to West Ham 1-0 while Fulham at the Craven Cottage lost to Everton 3-2.