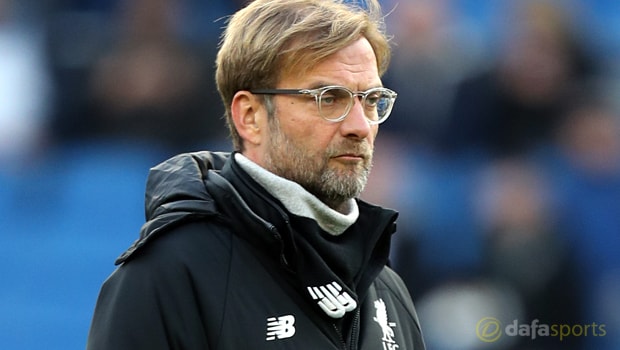 Jurgen Klopp says his focus is only on Liverpool’s next game after their impressive 5-1 win at Brighton helped them into the Premier League’s top four for the first time since August.

It was Liverpool’s fifth win in six league games and they’ve now scored 15 goals in their past four away games in all competitions.

Emre Can and Roberto Firmino scored two rapid-fire goals on the half-hour at the Amex Stadium to quickly take the game away from the hosts, who had looked comfortable to that point.

Liverpool’s stunning ability on the break haunted the Seagulls at times and Firmino made it 3-0 three minutes into the second half.

Glenn Murray pulled one back from the penalty spot soon after but Brighton couldn’t get the crucial second goal that would have ramped up the pressure on Liverpool.

The impressive Philippe Coutinho netted a fourth with a clever free-kick before Lewis Dunk headed into his own net.

For Klopp, it was immediately on to the next target as he looks to keep Liverpool on the heels of the pacesetters.

“It looks like we are flying,” said. “Unfortunately it’s not like that, we have to work really hard.

“We need results. In our calmer moments we are a really good team, but we need to carry on.

“I’m much more interested in the next game. It’s important that it’s good because we need the points, we want to stay as close as possible to the teams in front of us.”

Liverpool’s next assignment in the league is the Merseyside derby with Everton at Anfield on Sunday 10 December.