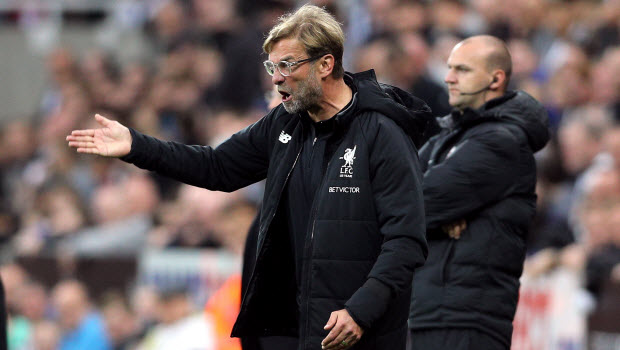 Jurgen Klopp felt Liverpool did more than enough to beat Manchester United in Saturday’s clash at Anfield, while referee Martin Atkinson could have boosted their hopes had either of two big calls gone in their favour.

For the second season in a row, the great rivals played out a scoreless draw on Merseyside, Liverpool once more doing most of the probing against a Red Devils side that had just one shot on target in the 90 minutes.

Joel Matip was denied in the first half by a superb reflex save from David de Gea, while Romelu Lukaku spurned United’s best chance by shooting straight at Simon Mignolet.

The Belgian could have been sent off, according to Klopp, for an altercation with Dejan Lovren before half-time. Emre Can volleyed over the crossbar with Liverpool’s best chance of the second half, before Philippe Coutinho saw his penalty appeals waved away by referee Martin Atkinson.

Klopp was content with his players and felt the game might have swung in their favour had either of the big refereeing decisions gone their way.

“It was a good performance, I thought worthy of three points. We were unlucky in at least two, maybe three situations – of course the big chance when De Gea made the save,” he said.

“There were a lot of good individual performances. Even when the last few games for us were not perfect, we were clear and concentrated.

“I felt the referee should have given us a penalty. Then, maybe, it was a red card with the Lukaku and Lovren situation. Two situations, with different outcomes producing maybe a different result.”

Liverpool are 2.00 to finish in the top four this season while Man United are 5.00 to win the league after this Anfield stalemate.