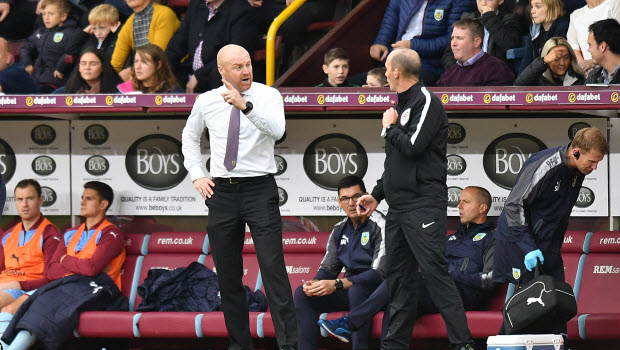 Sean Dyche declared himself pleased despite his Burnley side failing to win at home again after they were held 1-1 by ten-man West Ham.

The Clarets have managed only one win at Turf Moor from five games in all competitions so far this season, a 1-0 win over Crystal Palace back in August.

They fell behind to a route-one Mikhail Antonio strike early on, but saw their chances boosted when Andy Carroll picked up two quick bookings and was ordered off before the half hour mark.

Burnley dominated possession thereafter but they struggled to break down a well-organised Hammers defence. Chris Wood got the leveller with five minutes left from a well worked Burnley move.

Dyche was happy with team’s play, and felt they might have had a penalty. Burnley have won three times away from home this season, including Premier League successes at Stamford Bridge and Goodison Park, while they’ve also brought home points from trip to Tottenham and Liverpool.

On that basis, Dyche says he is happy with their return of 13 points from eight games so far, enough to see them in seventh place. “They [West Ham] sort of semi-camped in with ten men.

Generally we had a lot of the ball but it can be difficult to break them down,” said Dyche. “A fine bit of quality eventually got us a goal and it was a fine goal. It looked to me we could have had a penalty on Chris Wood too. We didn’t get it but you’d hope on another day we do.

“I’m very pleased. The way we’re going in general is good – I’m certainly not disappointed with that.” Burnley are back on the road next week, for perhaps their most daunting trip yet, away to Man City.