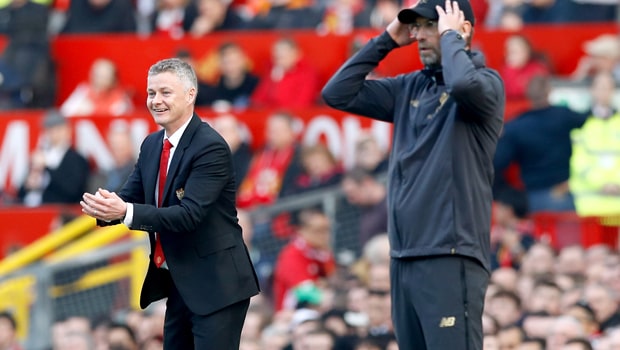 Jurgen Klopp felt Liverpool missed a trick despite a point at Manchester United that sent them top of the Premier League pile.

The sides played out a scoreless draw at Old Trafford on Sunday, enough to move Liverpool a point ahead of Manchester City in their race for the title – which now appears a two-horse contest after Spurs lost at Burnley on Saturday.

A point away at the home of their fierce rivals might have seemed like a decent return, but Klopp acknowledged Liverpool could have taken all three on a day when few things went right for their hosts.

Ole Gunnar Solskjaer lost Ander Herrera and Juan Mata to injury before the half-hour, with sub Jess Lingard then hobbling off before half-time. With Marcus Rashford visibly struggling, the Red Devils were cautious for the second 45 minutes.

Yet it was the home side that came closest to winning, with Liverpool relieved to see an offside flag after Joel Matip had turned the ball past his own goalkeeper inside the final 20 minutes.

Liverpool lost Roberto Firmino to injury in the first half and Klopp felt the succession of changes broke the flow of the game.

“It was a strange game. We started really well. All the injuries in the game obviously cost us rhythm. It happened to us with ‘Bobby’ and that was a catastrophe,” he said.

“United played with a completely new midfield and three up front. We lost our rhythm and couldn’t get it back.

“It was a game without a lot of highlights – it was intense. On days when United are beatable you have to do it and we didn’t do it.”

Liverpool are now 2.63 to win the title this season, with second-placed Manchester City now holding favouritism at 1.50.