Jurgen Klopp: Nobody will want to face rampant Reds 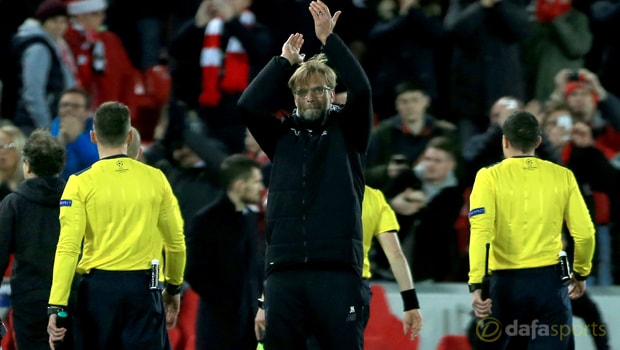 Jurgen Klopp admits a tough draw in the last-16 of the Champions League is almost inevitable, but he is adamant that no team will be happy to be paired with Liverpool.

The Reds clinched top spot in Group E courtesy of a 7-0 thrashing of Spartak Moscow at Anfield on Wednesday night.

Liverpool have scored 23 times in this six group stage games, a tally only surpassed in group-stage history by the 25 Paris St-Germain have notched this season.

Klopp’s team have fired 32 goals in their nine most recent games, a run during which they are unbeaten in all competitions.

Having clinched top spot ahead of Sevilla, Liverpool will avoid fellow group winners PSG, Barcelona and Roma but they could still be paired with any of Bayern Munich, Juventus or Real Madrid – all of whom have qualified for the knockout stages as group runners-up.

Klopp believes such a scenario means this year’s Champions League has a quirky feel to it, and he shares the belief of Chelsea counterpart Antonio Conte that finishing top is not necessarily an advantage this season.

“We knew if we won we would top the group so that’s not the biggest surprise but I think it’s strange this year in the group stages,” Klopp said.

“Antonio Conte said it, there are no easy opponents and I don’t think anyone is happy when they get us in the draw.

We will not be happy when we see who we face in the next round, but we will be ready.”

Liverpool are 26.00 to win the Champions League this season, while Paris St-Germain are favourites are 4.50.