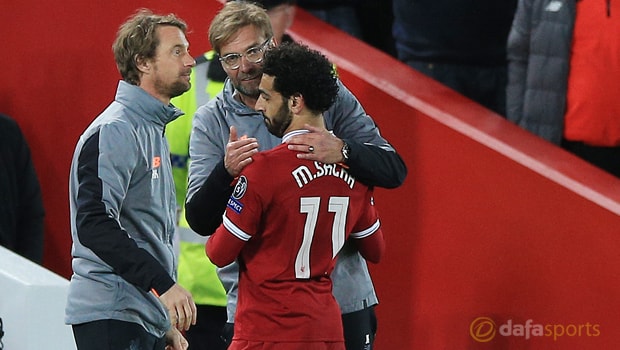 Jurgen Klopp says Mohamed Salah is in “outstandingly good shape” after the forward played a major role in Liverpool’s 5-2 victory over Roma on Tuesday night in the Champions League semi-final, first-leg.

The 25-year-old forward, who has now scored 43 goals in 47 games in his debut season for the Reds, then set-up both Sadio Mane and Robert Firmino after the break to give the hosts a 4-0 lead.

A second from Firmino made it 5-0 before late strikes from Edin Dzeko and Diego Perotti, who confidently dispatched a penalty when James Milner was adjudged to have handled the ball in the box, reduced the deficit to 5-2.

Despite conceding two late away goals, Liverpool are still firmly in the driving seat going into the reverse fixture at the Stadio Olimpico and Klopp was full of praise for man-of-the-moment Salah.

“The first goal is just a genius strike. He’s already scored a few like this – that makes it even more special. It makes it clear it is no coincidence.

The second goal was brilliant play… Then he makes the other two goals,” he said.

“If you think he’s the best in the world, write it or say it. He is in outstandingly good shape, in world-class shape, 100 per cent. That’s good.”

The only bad news to come from the game was Alex Oxlade-Chamberlain was stretched off in the first-half after appearing to injure his knee and he is now a major doubt to make England’s World Cup squad.