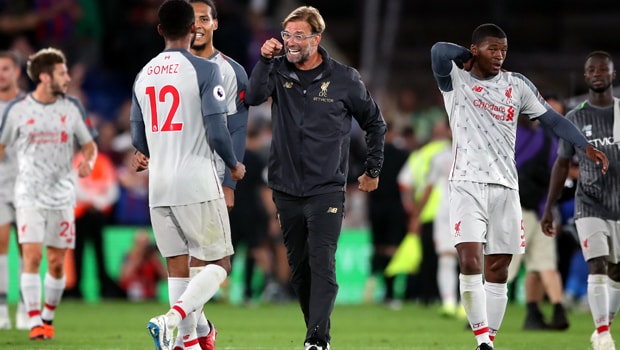 Jurgen Klopp said he was delighted that his Liverpool side managed to win “ugly” as they overcame Crystal Palace to continue their perfect start to the new Premier League season.

The visitors won 2-0 at Selhurst Park, the first converted from the penalty spot by James Milner after Mohamed Salah was fouled in the area.

Then, after coming under pressure from the home side they made the game safe in stoppage time, Sadio Mane scoring on a breakaway.

The home fans and Palace boss Roy Hodgson were annoyed by the penalty decision and the Eagles pressed forward in search of an equaliser in the second half.

However, with Virgil van Dijk outstanding in the Liverpool defence, they held firm to secure another win and another clean sheet.

It was the Reds attack that stole the headlines last season, scoring 84 goals in 38 league games.

Their supposed weakness was in defence so Klopp was delighted to see his team produce an effective rather than stylish performance as they held off the Palace attack.

He said after the game: “You have to play it as it is and be a real challenger, play ugly, do all that type of stuff. Our target is to be a difficult opponent. We did that.

“We could have done better offensively, and it was not a brilliant football game from us.

We don’t have to make it something it was not. But it was a big step. Everyone knows that when we are not brilliant, we usually lose. Today we weren’t brilliant but we won.”

Liverpool go in search of a third successive victory on Saturday when Brighton are the visitors to Anfield.